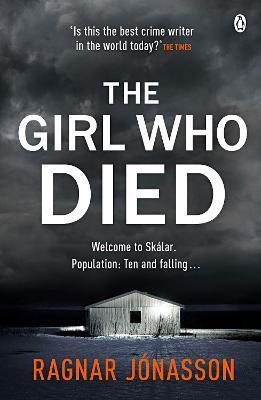 THE GIRL WHO DIED

PRE-ORDER THE NAIL-BITING STORY FROM THE MILLION COPY BESTSELLING AUTHORbr>br>''A world-class crime writer . . . One of the most astonishing plots of modern crime fiction'' Sunday Timesbr>br>''It is nothing less than a landmark in modern crime fiction'' The Times br>br>''TEACHER WANTED ON THE EDGE OF THE WORLD . . .''br>br>Una knows she is struggling to deal with her father''s sudden, tragic suicide. She spends her nights drinking alone in Reykjavik, stricken with thoughts that she might one day follow in his footsteps.br>br>So when she sees an advert seeking a teacher for two girls in the tiny village of Skalar - population of ten - on the storm-battered north coast of the island, she sees it as a chance to escape.br>br>But once she arrives, Una quickly realises nothing in city life has prepared her for this. The villagers are unfriendly. The weather is bleak. And, from the creaky attic bedroom of the old house where she''s living, she''s convinced she hears the ghostly sound of singing.br>br>Una worries that she''s losing her mind. br>br>And then, just before Christmas, there''s an unexplained death and Una''s life going from bad to worse . . .br>br>Praise for Ragnar Jonassonbr>br>''This is Icelandic noir of the highest order, with Jonasson''s atmospheric sense of place, and his heroine''s unerring humanity shining from every page'' Daily Mailbr>br>''Triumphant conclusion. Chilling, creepy, perceptive, almost unbearably tense'' Ian Rankinbr>br>''This is such a tense, gripping read'' Anthony Horowitzbr>br>''Brilliantly effective. Each book enraptures us'' The Times Literary Supplementbr>br>''Superb . . . chilling . . . one of the great tragic heroines of contemporary detective fiction'' Sunday Times Crime Book of the Monthbr>br>''A classic crime story seen through a uniquely Icelandic lens. First rate and highly recommended'' Lee Childbr>br>''Chilling - a must-read'' Peter James>